Gioacchino Antonio Rossini (29.02.1792 – 13.11.1868) – Italian composer, nicknamed “pezarian swan.” The son of a trumpeter and an opera singer. As a child, Rossini moved to Bologna, where his lessons began on the harpsichord; He also practiced singing. For 15 years, Rossini entered the Bologna Music Lyceum, where he studied until 1810; His teacher of composition was the abbot of Mattei. At the same time, Rossini began to conduct opera performances. By this time, Rossini’s first creative experiments – the vocal numbers for the wandering troupe and the one-act comic opera The Bill of Marriage (1810) – refer to the same creative experience.

By 1813, the beginning of the mature period of Rossini’s creativity. Comic opera “Italian in Algeria” and the great heroic opera “Tancred” (both the post of 1813, Venice) determined its main lines. In these operas, the patriotic feelings of the Italian people after the Napoleonic wars and during the struggle for national reunification were reflected. 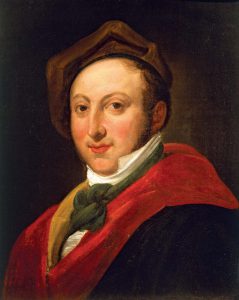 In 1814, Rossini’s comic opera “The Turks in Italy” was written, and in 1815 – the great historical opera “Elizabeth of England”, staged at the Neapolitan theater “San Carlo”. For this same theater Rossini wrote some of his operas.

In 1816, in Rome for the first time delivered a masterpiece of Rossini in the comic opera – “The Barber of Seville” on the subject of the 1st part of the trilogy by Beaumarchais . This opera was the result and a generalization of the age-old development of the Italian opera buff. The following comic operas by Rossini as Donizetti , nothing new introduced, for all their individual artistic merits. “The Barber of Seville” Rossini wrote in a record short time (about 20 days). Before he could write an overture, he used the overture from Elizabeth in this opera. The music of the “Barber of Seville”, temperamental, sparkling with wit and merriment, is rooted in the favorite genres of Italian folk dance and songwriting. Characteristics of actors (mainly in arias) are distinguished by their accuracy and imagery relief. Ensembles are extremely dynamic. All this provided the “Seville Barber” a long life on opera stages around the world.

In the same 1816 Rossini’s “Othello, the Moor of Venice, or” based on the story of the tragedy was staged in Naples Shakespeare . Here already quite noticeable are the trends of romanticism that embraced Italian opera in the first half of the 19th century; In the last act of the opera the composer introduced the folk song of the Venetian gondolier, which is not typical of the Italian opera-series, under the influence of which a simple sad melody of Desdemona’s song about the Ivushka appears, also in the national spirit.

After the “Seville Barber” Joachino Rossini wrote several comic operas. These include “Cinderella” (post 1817) and partly “The Magpie” (post 1817). The latter is not entirely within the genre of opera buff. It is usually applied to the definition of semiseria (“semi-serious”), because comedy positions are moved to the background, and the first is put forward didactic, moralizing the beginning. This is more of a philistine melodrama.

Having lost interest in the comic opera, Rossini in the following years devotes his work primarily to the heroic-patriotic opera. In this should be seen a reflection of the growth of patriotic feelings and national self-awareness in the period of the liberation struggle of the Italian people. For the same Neapolitan theater, he writes operas (dates of the post) – “Armida” (1817), “Moses in Egypt” (1818), “Hermione” (1819), “Woman from the Lake” on the plot of the poem by V. Scott (1819). ), “Mohammed II” (1820), “Zelmira” (1822), etc. In heroic operas Rossini widely uses choruses and large ensembles, thus preparing the monumental style of his last opera “William Tell”.

After the suppression of the Carbonari rebellion in 1820-1821, Rossini, together with the troupe of the Neapolitan theater left Italy and went on tour to Vienna, where he triumphantly staged his operas. Slava Rossini eclipsed even the glory of the great Beethoven . Returning for a short time to Italy for the production of the opera “Semiramide” in Venice (1823), Rossini traveled to London via London, with whom he links the rest of his life and work. In Paris, Rossini served as director of the Italian Opera Theater. 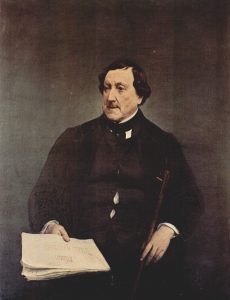 In the French capital, he put in operative form his operas Moses and Mohammed II (under the new title “The Siege of Corinth”), wrote for the Opera Comic Theater Graf Ori (1828), and for the Grand- Opera “-” William Tell “(1829), who turned out to be his last opera. “Wilhelm Tell”, written on the plot of the drama of Schiller, was the highest achievement and generalization of the heroic and patriotic line of Rossini’s work. The revolt of the Swiss people against the Austrian enslavers, depicted in the opera, was extremely important in the years of Italy’s struggle against Metternich’s Austria, which extended its yoke to many areas of Italy. This same heroic-revolutionary plot of the opera also responded to the moods of the broad democratic circles of French society in the period preceding the July revolution of 1830 in Paris. The abundance of the choral mass scenes, the general upbeat tone (especially in the main character’s part), the large orchestra playing a very active role, all this gives the opera “Wilhelm Tell” the character of a monumental performance requiring a big theater and a big stage. Local color (the use of typical Swiss-Tyrolean tunes in music), images of nature (lakes, the mountainous landscape of Switzerland) impose a stamp of romanticism. Opera “William Tell” by Rossini, along with “The Dumb Girl of Portici ‘ by Auber (post. 1828) was an important link in the chain of events that made up the story of” a great French opera “from the Paris Opera, Gluck and Spontini to the historical and romantic operas of Meyerbeer .

Without resorting more to the art of opera, Rossini, as director of the theater of the Italian Opera in Paris, attracted to the work of his younger contemporaries Bellini , Donizetti and others. By the 1830s, include a number of sacred works of Rossini, in Vol. H. The famous “Stabat mater” , A collection of songs “Musical Evenings,” ensembles, choirs and various compositions written in case (in connection with public events, anniversaries, exhibitions, etc.).

About 40 operas by Joaquino Rossini primarily determine the great historical and artistic significance of his work, in which two directions can be distinguished: the comic opera, which he summed up brilliantly, and the heroic-patriotic, which played an important role in the further development of this genre in Bellini’s work and the young Verdi .

True, Rossini paid tribute not only to the good, but also to the bad tradition of Italian opera art, expressed in the dominance of vocal virtuosity, in the hedonistic cult of “pure” vocalism to the detriment of the dramatic meaning. Most of all external vocal virtuosity, coloratura singing is observed in the Neapolitan operas of Rossini (1815-1823). But in Rossini’s best comic operas (“Italian in Algeria”, “The Barber of Seville”, “Cinderella”), vocal virtuosity has figurative meaning, serves as one of the means of musical characterization. In the last opera “Wilhelm Tell” the entire vocal sphere is distinguished by a deep dramatic truthfulness and expressiveness.

Joachino Rossini had a rare melodic talent. The orchestra in Rossini’s operas is not limited to the accompanying role – it is distinguished by dramatic expressiveness, participates in the characteristics of the characters and scenic situations.

If the composition of Rossini’s operas is traditional (musical numbers alternating with recitative), in essence his work led to the renewal of the main directions of Italian opera art and determined its further ways.